Angkor Thom was the longest-lasting capital of the ancient Khmer Empire. The walled city was the centre of a huge building program by King Jayavarman VII, covering an area of 9 km2. Constructed in the late 12th century, the city was eventually abandoned in the 16th century. 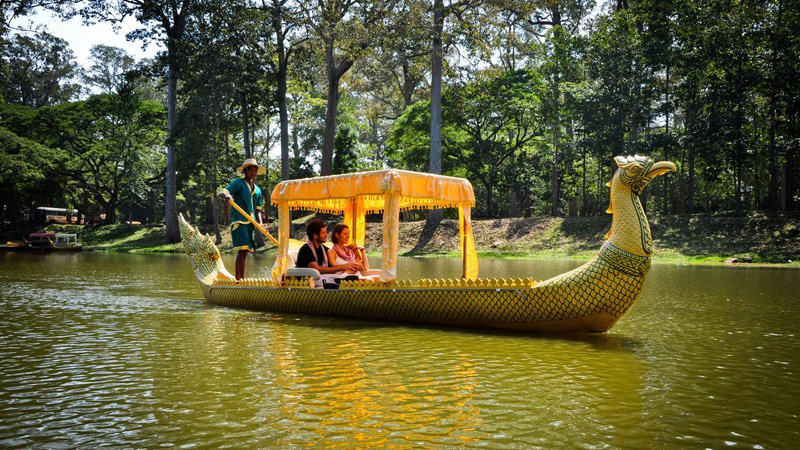 Join us for a cruise exploring the natural wonders and hidden treasures of this historical site while admiring the stunning sunset from a traditional Kongkear gondola.

Imagine drifting along the tranquil water of the moat surrounding Angkor Thom, without any sounds of engines disturbing the tranquil moment. A romantic sunset illuminates the whole area and the splendid temples of Angkor will be imprinted in your mind forever.

Contact Us to add this island getaway to your itinerary.

The Kecak Fire Dance is one of Bali’s most iconic and mesmerizing displays. Performed at a cliff-top amphitheater beside Uluwatu Temple, tiered concrete seating...

Bali’s architecture is not only very famous in Asia, but it is globally recognized for its distinctive style. Combining a classy tropical lifestyle with...

Snorkeling and diving in Gili Islands

Komodo National Park is famous for its native Komodo Dragons, gigantic lizards that can be as long as 3 m and weigh well over...

Mount Bromo is an active volcano belonging to Bromo Tengger Semeru National Park, arguably the most popular tourist attraction in the province of East...

Considered to be the soul of Indonesia and its cultural and artistic center, Yogyakarta is the most interesting city in the country. Discover the...

Bandung is the capital of West Java province in Indonesia. Set amid volcanoes and tea plantations, visitors are often attracted by the spectacular natural...

Purify the mind and body with Ayurveda treatment

Leave the world behind to relax and rejuvenate, with special Ayurvedic treatment. This treatment is executed under medical supervision and is the latest standard...

Esala Perahera – The Festival of the Tooth

Esala Perahera, also known as the Festival of the Tooth, is usually held in the summer (July or August) in Kandy. It honors the...

Yala National Park covers nearly 1000 km2, and is home to the highest density of leopards in the world. As around 40 leopards are...