Water puppetry is a delightfully quirky form of theatre in which the action takes place on a stage of water. This tradition originated in the rice paddies of the northern Red River Delta, where performances still take place after the spring planting. Water puppetry as a folk art dates back to the 11th century. Communal ponds in Vietnam’s towns and villages were perfect stages for these charming impromptu performances. Most plays focus on the experiences of daily life in rural areas, while some share history and folklore of Vietnam. These plays are imparted from generation to generation, preserving the cultural legacy of the Vietnamese. 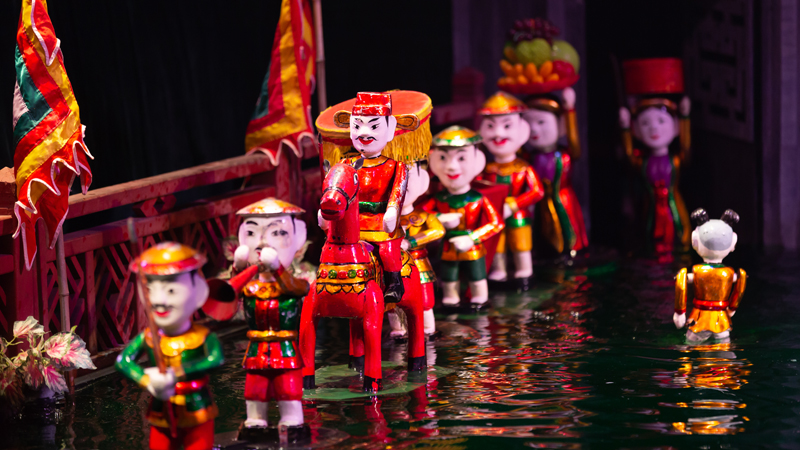 This traditional performance is mesmerizing to watch. Puppeteers stand waist-deep in water, obscured by a split-bamboo screen, as they manipulate the hand-painted wooden puppets attached to the end of long poles concealed beneath the water. Puppets of dragons, ducks, lions, unicorns, phoenixes, and frogs spout smoke, throw balls and dance on the watery stage as if almost by magic.

Visitors have the chance to experience this intangible heritage at sophisticated performances in Hanoi and Ho Chi Minh City. You may even witness fireworks emerge to dance on the water, to simulate a naval battle.
Hanoi’s Thang Long Water Puppet Theatre is one of the most popular attractions in the capital. Tickets often sell out well in advance, so be sure to book yours as soon as possible.

Contact Us to add this excursion to your Vietnam tour.

Phu Quoc Island is one of Vietnam’s most popular holiday destinations. Located in the Gulf of Thailand just 15km off the coast of Cambodia,...

Dinner on Saigon River Cruise offers an opportunity to witness another side of Ho Chi Minh City. A world away from the bustling metropolis,...

Floating markets have long been an essential part of life in Vietnam’s Mekong Delta. As hundreds of colorful boats commute daily, the Mekong Delta...

Discover the coastal beauty of Nha Trang on a fun-filled cruise aboard the Nha Trang Horizon cruise. Guests can enjoy a thrilling experience with...

Ride a bamboo basket boat in Hoi An

A bamboo basket boat is a valuable part of life for the fisherman in Central Vietnam. See for yourself on a trip just 5km...

Ha Giang is one of Vietnam’s most northern provinces, at a distance of over 300 km from Hanoi. While the provincial capital is not...

Pu Luong is one of the most beautiful destinations you’ve never heard of. This remote nature reserve is an impressive natural getaway just a...

Ninh Binh is an underrated gem of northern Vietnam. The city is an ideal base for trips to the surrounding area that’s home to...

Get the bird’s-eye view of the stunning limestone formations emerging from the jade waters of Halong Bay, during a 30-minute seaplane ride over this...

Discover one of the greatest attractions in northern Vietnam, on a memorable cruise in Halong Bay. Located approximately 180 km from Hanoi, Halong Bay...