Imagine a verdant park full of intricately carved demons, snakes, monkeys, gods, tortured souls, heaven, hell, and Buddha. This is the surreal setting of the Buddha Park in Laos, where elaborate and once abandoned Buddhist and Hindu statues fill the grounds. 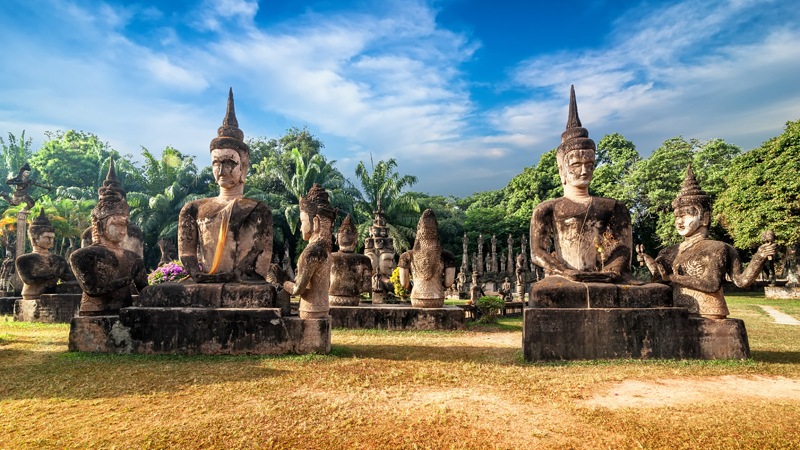 The Buddha Park or Xieng Khuan is a sculpture park 25 km from Vientiane off the banks of the Mekong River. The park contains over 200 Buddhist and Hindu statues created in 1958 under the watchful eye of a priest-shaman named Luang Pu Bunleua Sulilat.

This extraordinary sight is where fantasy meets mythology and where Buddhism has been integrated with Hinduism. The fantastical concrete sculptures in Buddha Park create a deeply mystical yet bizarre atmosphere. The park is also oddly interactive, as you can wander into the mouth of a demon or climb up a giant pumpkin head with three floors representing hell, earth, and heaven. This eccentric destination is a must for travelers drawn to the obscure and otherworldly.

Contact Us to add this excursion to your itinerary.

Uncover gold-covered Pha That Luang – A symbol of Buddhism

Discover one of the world’s 10 most famous Buddhist temples during your adventure in Laos with Crystal Holiday Travels. The splendid That Luong is...

Indulge in your own a memorable romantic cruise along the Mekong River with your loved one. Crystal Holidays Travel experts will pick you...

While Laos is a landlocked country, you may be surprised to learn that it is home to a place called “4,000 islands”. Known locally...

Experience a magical local tradition with Crystal Holiday Travels. The Baci Ceremony, an important ritual of Laotians, especially in the North. It is often...

Up in the mountains outside of Luang Prabang lies one of the most tranquil destinations, the mighty Kuang Si Waterfalls. A multi-tiered waterfall with...

Creat your own theories about the mysterious Plain of Jars

Welcome to Asia’s most mysterious attraction. Located in Phonsavan, the Plain of Jars is a vast plain, with hundreds of stone ‘jars’ scattered across...

Laos’s delightfully friendly capital is one of Southeast Asia’s most underrated cities. While many visitors dismiss it as a modern, dusty city, it has...

Rise before the dawn to experience a ritual unique to Luang Prabang. This sacred city and UNESCO World Heritage Site rings its bells early...